This is a simplified version of the regulation to highlight changes made in 2009.

BS 5306-3:2009 was issued and effective from 31st July 2009 and has a number of significant changes which will affect the portable fire extinguishers within your premises, as follows:-

1) Fire Legislation
Within the definitions of the standard it is clearly stated that the Regulatory Reform (Fire Safety) Order 2005, Fire Safety (Scotland) Regulations 2006 and Fire Precautions (Workplace) Regulations (Northern Ireland) 2001 are the current UK legislation.

2) Competent Person
The ‘Competent Person’ (Service Technician) is now defined as a person with the qualifications, training and experience, with access to the relevant tools, equipment and information, manuals and knowledge of any special procedures recommended by the manufacturer of an extinguisher to carry out the maintenance procedures.

3) Responsible Person
The standard clearly defines the responsible Person as ‘person or persons responsible for or having effective control over, fire safety provisions adopted in or appropriate to the premises or building or risk where an extinguisher is installed.

4) Commissioning
New portable fire extinguishers now need to be commissioned by a ‘competent person’ as defined in 2). Upon removal from its packaging and transit protection, and immediately before placing in its designated place, the extinguisher should undergo the sequence of commissioning service actions described in Annex B, taking into account the safety precautions given in annex C.

7) Extinguishers ‘Not Maintained’
Where previously extinguishers which were not maintained could be marked as such, the new standard does not allow for this and where the extinguisher is not maintained, including at the request of the client, it is condemned and should be replaced. This also covers obsolete extinguishers and those where no service schedules are available such as soda acid, inversion to operate, plastic body, riveted body, non refillable and past expiry date and post 2002 with no CE mark types.

When carrying out these visual inspections, it should be ensured that:

9) Permanent Replacement of Extinguishers
It is the duty of the responsible Person to arrange for permanent replacement extinguishers to be put into place as soon as possible after an inspection has shown that any extinguishers should be replaced. 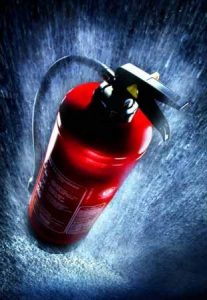